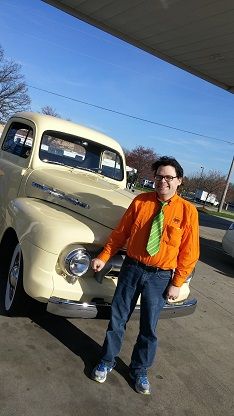 Roger is an artistic young man who enjoys working with his hands. He currently works as a materials handler at DSC, but he would love to be able to make a living selling the art he creates. He enjoys painting on canvases and making crafts for people. He also enjoys constructing and collecting model cars. He stated that he would like if he could sell these as well; unfortunately, they do not sell as well as his other art pieces. He gets inspiration on how to paint his cars by attending car shows. He recently went to a car show at Fluid Events Center which he described as being great. His favorite car was, “the beast,” a Monte Carlo with green lights.

Roger is a family man, and tries to spend as much time as possible with his family. He said he does not see them as often as he likes, but he speaks with them frequently on the telephone. He recently visited one of his sisters this weekend and hopes to be able to eat dinner at his other sister’s restaurant, Ne’s Place in Piper City. Roger appreciates when his sisters take him to visit the gravesites of passed loved ones so he can pay respect to them.

In his spare time, Roger listens to Scotty McCreery and other country music artists. He also enjoys watching WWE on Monday evenings, and going out for lunch with his staff to Popeyes