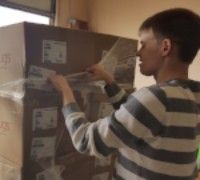 Stewart is an active young man who values working as a material handler at DSC.  He recently beat his own record of completing 700 red caps in one day! When he is not working, he likes to volunteer at the Champaign County Human Society. While he is there, he enjoys petting the cats. He also enjoys going swimming at the Stephens Family YMCA whenever he can, and going out with his coworkers to see a movie at the Carmike Theater in Champaign. Stewart is a big fan of movie theater popcorn and always has some whenever he sees a movie. Doughnuts are another favorite food of his.

One of Stewart’s passions is trains. He watches videos of trains on his computer frequently, and would love the opportunity to one day ride in a train. Stewart also likes riding the carrousel at the Market Place Mall in Champaign, which he was able to do for his last birthday. Stewart’s musical interest revolves mainly around soundtracks from Disney movies, such as the theme song, “Why should I worry?”, from Oliver & Company. He has a special place in his heart for Disney movies, especially those that are based on animals such as Oliver & Company and the Aristocats.