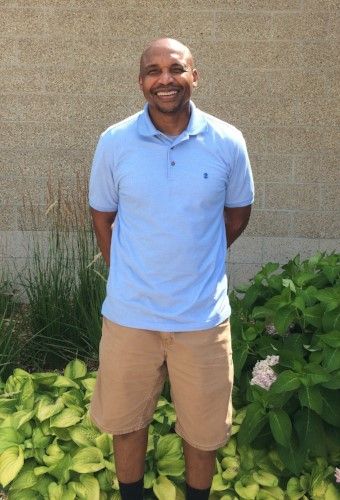 Jeff is an Employment Counselor at DSC and recently he has been job coaching too. Jeff has been at the agency for over 14 years now.

Jeff leads the Health Matters and MTD Discover Illinois groups. He is also well-known among his co-workers for playing a big role over the years with the DSC Softball Team. (Wait…DSC has a softball team?! Want to know more? Sarah Baird is the new contact for the softball team).

Jeff shared that he has remained at DSC over the years because he enjoys his co-workers, working hard and having a good time. He also said that when he came to DSC, there were leaders here like Annette Becherer and Dale Morrissey who had been in their positions for a long time and that stood out to him because it’s not as common these days to see people remain at in their jobs for long periods

“I watched them do that and I hope to be an example in the same way. It can be challenging to stay motivated to do the same thing every day and not get burned out. You have to take care of yourself. When you encounter something tough, you can’t let it get the best of you because the people here are counting on us.”