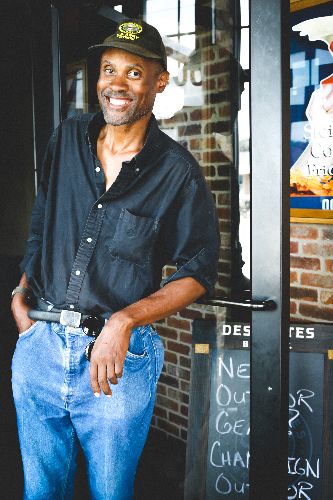 Darrin is a person who receives services from DSC, whom we’ve featured here in the past. With a desire to move from volunteering, to working in a paid position, Darrin sought out job coaching through DSC’s Employment Services programming.

Darrin successfully found a position at Scotty’s Brewhouse in early June of 2018. Working as a host, he opens doors to greet Scotty’s guests, he clears off tables and takes the dishes to the kitchen. Since working with a job coach and beginning his position at Scotty’s, Darrin has learned to ride the MTD, and says he’s feeling more confident and independent. “I just love being here at my job,” he said. Darrin started with working two days a week, but has increased now to five days. “I also just got my own apartment. My sister helped me and I had God’s help,” said Darrin.

When he’s not working at Scotty’s, Darrin enjoys collecting Bibles. He has a large collection of picture Bibles, as well as text only editions. Since the time of our last update on Darrin in March, he has joined the Storytelling group offered by the Employment Program. The group meets at local libraries and The Crow at 110. Initially, Darrin felt unsure about his writing ability. Like many new writers, he wasn’t sure if he had much to say. He’s been a part of the group now for several months and has become passionate about his writing. Darrin has been writing historical-fiction. One of the pieces he’s written is forty-four pages on World War II. “I want to write another one on the 18th century period,” said Darrin. Growing up, Darrin used to study encyclopedias and says that he enjoys history.

Up next for Darrin is getting his work published. “I don’t know if it’s that good, or it people will have time to read my books because they’re busy, but I want to get them published.”