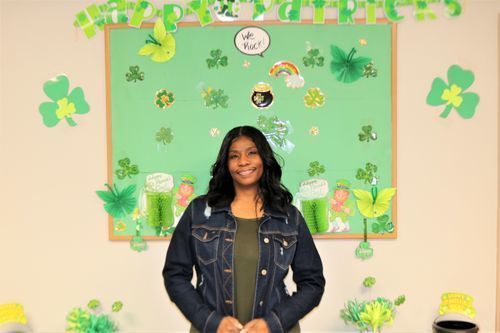 Margaret Smith will celebrate her fourth anniversary with DSC this June. She was working in a residential CILA (Community Integrated Living Arrangement) at a similar organization, when she met DSC employee, Ania Howard. Ania asked her to consider applying for an open position. Margaret did apply and later began her career at DSC. Now, she and Ania are co-workers in the same department.

Initially, Margaret worked at DSC’s CILA in Rantoul, since she also lived in Rantoul at the time. When she later moved to Champaign, she was also able to transfer to a position in Champaign. “One of the nice things about working for a larger agency is that there are opportunities to make changes in your job like that when there are openings and it’s a good fit,” said Margaret. She now works as a Direct Support Professional (DSP) in our Community Day Services program.

Margaret is Known for Her Creativity at DSC

Prior to beginning a career in the disability industry, she worked as a CNA (Certified Nursing Assistant) at a local nursing home for 14 years. “It was a big change for me at first to go from working with retired folks to people with disabilities. I’ve had to lean on my creativity more, but it’s been a good challenge for me.” Today, Margaret is known around DSC for her creative skills and a cheery work area that is themed for each holiday.

During the pandemic, she said she felt personally challenged to come up with ways to brighten the workspace for the people she provided support for each day, in addition to developing activities they were interested in. “I didn’t want it to be like we were just stuck in here passing the time because of COVID-19. It’s really important to me that we do things they’re interested in and coming here makes a difference in their lives every day.”

A Typical Day in Margaret’s Group

On a typical day, Margaret works with her group to hone writing and life skills concepts. They also have music and computer time, based on the interests of those in the group. The group has been able to continue walking at YMCA and when the weather’s nice, they walk outdoors here at DSC to get the exercise and fresh air. She’s also created an indoor ball toss game for them to play. “It might seem small, but one of my most exciting moments, was when someone in my group learned to write the capital version of the letter E. He was so proud and kept saying, ‘I write! I write!’ It’s hitting those milestones that motivates me to keep going.”

One of Margaret’s favorite memories while working at DSC was during her first year of employment. “I was standing in the lunch room with several people, when a person who receives services thought it would be funny to pull my hair. He actually pulled my hair off! It scared him so bad that he dropped my hair and ran. He never pulled my hair again after that! If I hadn’t already worked as a CNA, it might’ve scared me too, but it didn’t bother me,” Margaret said laughing.

Outside of work, Margaret is active in the church community, is an evangelist and said she is a laid-back person. She loves spending time with her family, whenever she can. She has four grown children and she’s a grandmother.