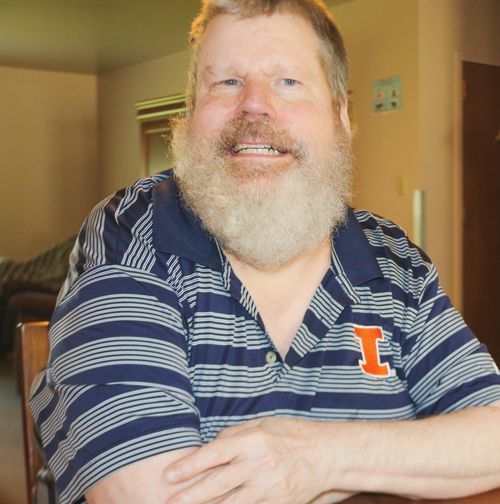 Francis is a long-time recipient of DSC supports, and participant in DSC Community Day Services. A few years prior to the pandemic, Francis decided to retire from coming to Community Day Services. He chose to stay at home in his DSC CILA (Community Integrated Living Arrangement) and enjoy his time in retirement, at a slower pace of living.

When the pandemic began, DSC continued programming for individuals in their homes. State guidelines during the shutdown prevented individuals from coming to other DSC locations.   During this time, he’s been able to enjoy DSC staff coming to his home, and providing extra activities. Francis enjoys a variety of science and history related topics, including mechanics, volcanoes and earthquakes, and Egyptian hieroglyphs.

One of his favorite activities is disassembling computer hard drives, and electronics, so he can examine all of the parts. He draws the parts, and enjoys studying a book about DIY repairs. He will tell you himself though, he doesn’t want to take apart anything with glass in it. He also studies and draws photographs he sees in National Geographic magazines, such as the Venetian Towers in Barcelona, Spain. Francis is also an Illinois Football fan.

Francis is also known around DSC for his love of St. Patrick’s Day. In fact, some people around DSC call him Mr. St. Patrick. With Chicago-Irish roots, Francis loves to embrace his Irish heritage by dressing up for the holiday and going out for an O’Doul’s, non-alcoholic beer. Francis gets his affinity for the holiday celebration honest. His family once owned Finnigan’s, the Irish Ice Cream Parlor in the Chicago area.

Francis and his roommates recently went to the Grand Prairie Museum in Mahomet and spent an afternoon bowling. Upon returning from the trip, Francis pulled out his maps and showed a DSC staff member places on the maps he wants to go next.

As conversations about returning to community day services continued with Francis, he decided to remain retired but he would like to be able to continue to enjoy some of the additional activities he’s become fond of at home, when others return. These will be at the pace he chooses, and in his home, where he can live the independent retired lifestyle he desires, but he can still head out for an O’Doul’s now and again, if he chooses, perhaps a road trip, and decide for himself whether his beard will stay or go for the summer.