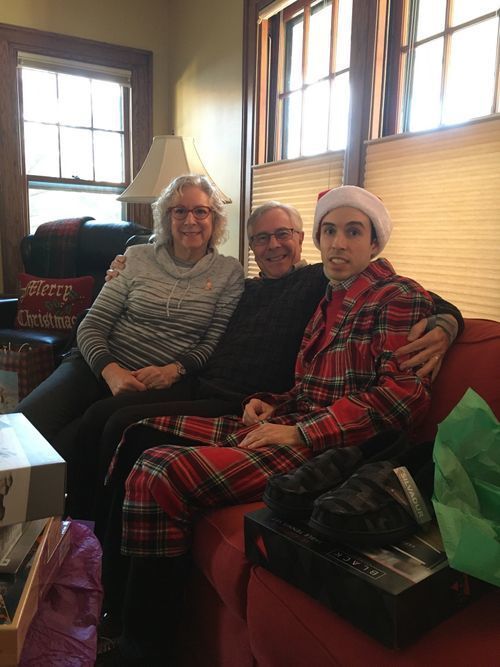 As part of our Annual Tree of Hope Kick-off, we also include a special recognition event and award several individuals for their outstanding achievements. This year is our 35th year for the Annual Recognition Awards. DSC is proud to award Daniel Krein with the 2021 Personal Achievement Award.

During the pandemic, Daniel’s family was notified that Daniel had been selected from the State of Illinois PUNS (Prioritization of Urgency of Need of Services) List and qualified for funding for a CILA (Community Integrated Living Arrangement).

The PUNS list is a statewide database of individuals who want and need Developmental Disability Waiver services that are funded by IDHS (Illinois Department of Human Services). As funding becomes available, individuals are notified and invited to apply. “We immediately contacted Patty Walters and Danielle Matthews at DSC about getting Daniel into a CILA because we knew this could take some time,” said Sheila. “He moved in October, and then due to the guidelines at the time, we only saw him while home for two-weeks at Thanksgiving and for Christmas. It’s only recently, since we’ve all been vaccinated that he can come for a day, or a weekend.” Time with family is encouraged and supported and everyone is excited that statewide COVID restrictions are loosening up.

Sheila says it’s been an adjustment, but explained that they’ve raised all of their children with the goal of independence. It’s important to raise your kids with a work ethic, and high expectations. We always wanted to teach him to be a good citizen. Daniel has worked at Planet Fitness for eight years. “Daniel is doing such an amazing job! He’s become more assertive on the job and should be really proud of himself. He has increased his work responsibilities, as well. Seeing his progress and learning new skills, gives me the motivation and drive to want to try something new,” said DSC Employment Specialist, Maggie Brown who works as a job coach with Daniel.

Daniel also enjoys being involved with Prompting Theater. Sheila said that the group’s instructor, and DSC employee, Brian Hagy has been instrumental in Daniel’s transition into a CILA. “Brian was one of the people who was providing in-home Community Day Service programming during the first year of the pandemic, so they spent a lot of time together.” Most recently, Daniel has participated in a theater production that featured mimes, through a class Brian teaches at CUSR (C-U Special Recreation). Sheila also wanted to recognize others who’ve been supportive to Daniel including Elvira, Tim, and Jared.

Daniel has also been involved with making soap through the Crow at 110, volunteering, men’s groups, and like everyone, he’s been learning to Zoom.  During that time, he worked with Community Employment Manager, Aj Zwettler. “My favorite memory of working with Daniel is volunteering together at the IDEA store. I’d pick him up from work and we would head over there. When we arrived we always had what seemed like a mountain of pens, markers, and highlighters to test. I always remember feeling like we could never possibly get through this mass of writing utensils. Each time, Daniel would come in and get straight to work, very serious about his job as a tester. He had a particular notebook he liked to use for his testing work and was very thorough about properly testing each one. Throughout our weeks at the Idea Store, he filled his entire notebook with perfect test lines, and to my surprise, we no longer had a mountain. What I learned from Daniel is that sometimes you just have to get through things, one-by-one, and eventually you’ll tackle your mountain,’ said Aj.

Daniel’s well-known for his love of puzzles. He stays active in Special Olympics, and CUSR, and especially enjoys running, bowling, walking at the park, and swimming. Congratulations, Daniel on your outstanding achievements!