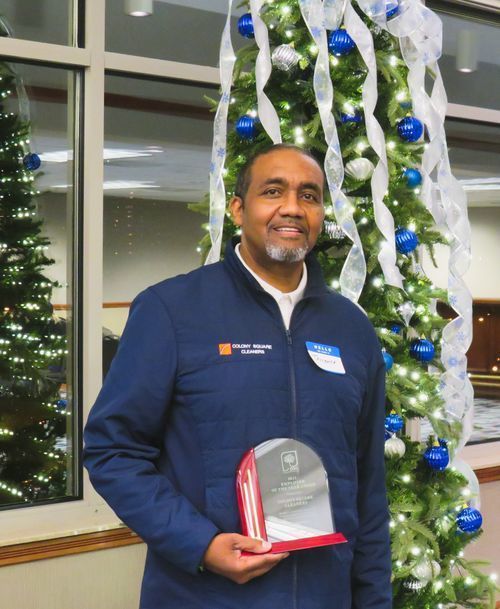 As part of our Annual Tree of Hope Kick-off, we also include a special recognition event and award several individuals for their outstanding achievements. This year is our 35th year for the Annual Recognition Awards. DSC has been fortunate over the years to work alongside many wonderful community partners, and collaborators-more than we could ideally mention in this article. One of those partners is Colony Square Cleaners. DSC proudly awarded Colony Square Cleaners, as 2021, Employer of the Year.

Established in 1979, Colony Square Cleaners is a locally-owned, family business, located at 701 Devonshire Drive in Champaign. We spoke with Terrance Jones, who accepted their award at the Tree of Hope Kick-Off and Recognition Awards Event in November. Terrance, the nephew of President, Alvin Griggs. Mr. Griggs was always an educator, along with running Colony Square Cleaners, he worked in the Unit #4 Schools, as a teacher, coach, and Administrator, as an Assistant Principal at Centennial, and Principal at Edison Middle School, until he retired.

Terrance fondly remembers growing up in Alabama, and coming to visit his Uncle each summer in Champaign. Mr. Griggs. “When the business first opened in this location, there was nothing in this area really, except cornfields. Many of the shops didn’t survive over the years.” Terrance recalls a time around 1995, when career trends were changing. “Styles in the workplace began to change from suits, to wearing khaki pants and polo shirts. Mr. Griggs caught on to this trend fast, and we began doing laundry. His foresight helped our business survive that era.”

Colony Square Cleaners began working with DSC after receiving a phone call from a DSC Employment Services Specialist. Colony Square Cleaners was already open, and familiar with the idea of hiring someone with a disability. Fair employment is one of the values in their mission statement, and they had previously employed a friend of the family with a disability, who had since passed away, and left an impact on their family. Terrance’s son also used to manage a Community Integrated Living Arrangement for an organization similar to DSC, located near Colony Square Cleaners. For all of these reasons, when they were introduced to John, it seemed like a natural fit.

In 2018, John began working for Colony Square Cleaners. Terrance said before John started, they provided a letter to their staff reminding them of the positive and respectful work environment they’ve always expected, and how it wasn’t anything new to be kind and patient-it was simply part of their culture. The letter ended, “I know I can count on you because we love a positive environment here at Colony Square Cleaners,” an encouragement applicable to all workplaces.

Not long after, John was recognized for his personal achievements at DSC, through his employment accomplishments. “John is a hard worker, and passionate about being here. He’s always here early, and doesn’t miss, unless he’s ill. During these times, that’s very important. He’s grown in what he’s able to do here. He has mastered techniques that even I can’t do, like folding fitting sheets. We just joke, don’t mess with his Friday lunch. We always get lunch from Culver’s on Friday, as a team here, and that is very important to John.” Terrance said partnering with DSC’s Employment Services team, and job coaching has also been helpful. “The staff at DSC have been wonderful. We’ve worked with a number of the job coaches, and I can’t say enough about them.”

Congratulations, Colony Square Cleaners on being named DSC 2021 Employer of the Year! Thank you for supporting DSC’s Employment Services program, and modeling inclusive employment in our community.