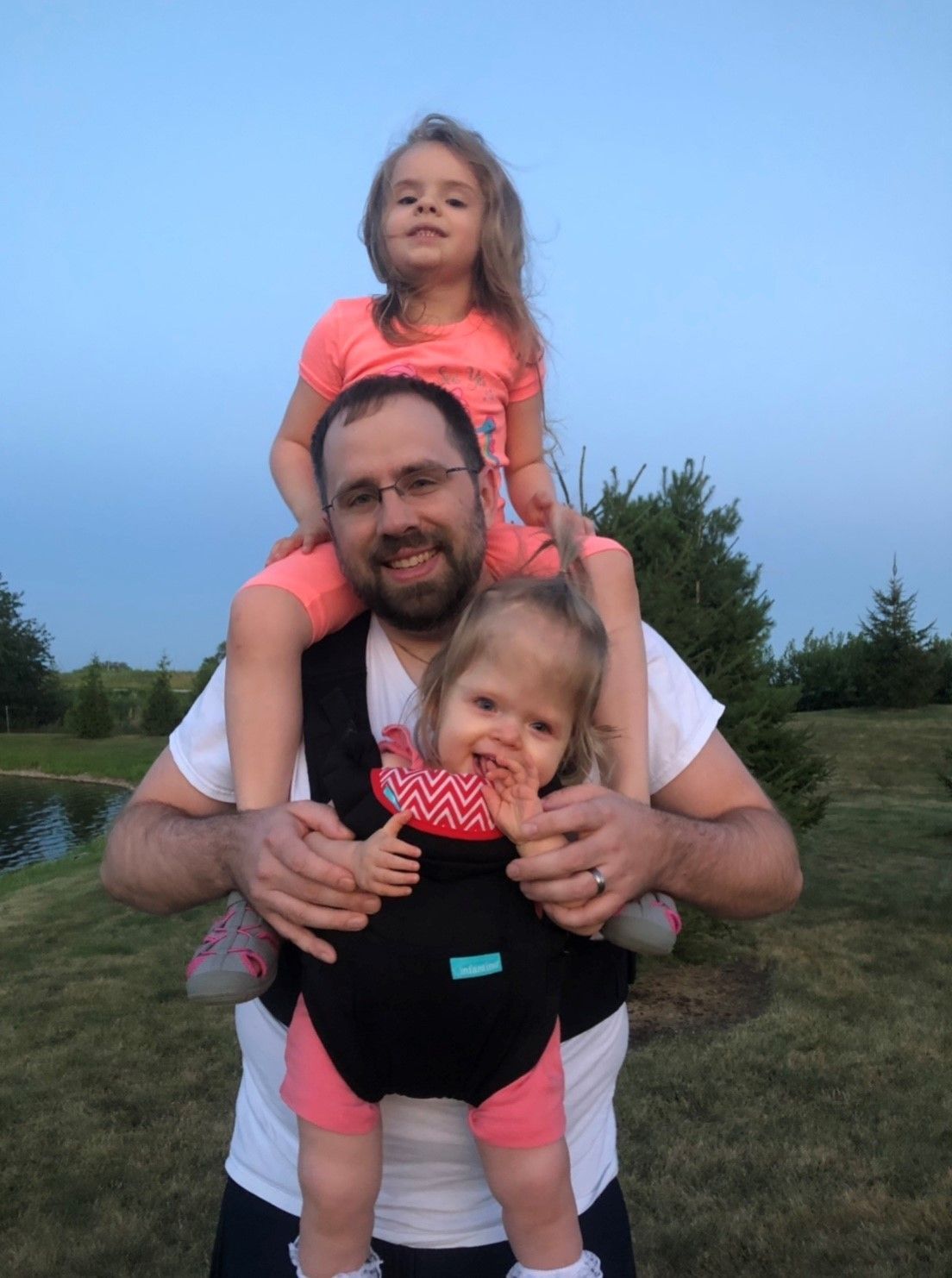 In celebration of Father’s Day, we are recognizing DSC Dads and all they do to support members of their families with developmental disabilities. Thank you Dads!

One of those Dads is Bryan Freres. You may recognize Bryan from the fall of 2020, when we featured his daughter Charlotte and their family as the Tree of Hope Spokesfamily. We recently had the opportunity to catch up with Bryan to find out what he, Ciara, Reagan and Charlotte have been up to, and how they have been doing.

The lifting of most of the pandemic guidelines brought a bit of relief to the Freres family, Bryan said. They have been able to get out of the house more, which is great for Charlotte. “The isolation brought on by the pandemic was difficult for Charlotte, especially.”

The Freres family has also built a home since we last spoke, which has opened up a new world for Charlotte. Now four years old, Charlotte is confident and active in her wheelchair, and wheels out at the end of school each day. “We’d like to think it’s solely to greet her Mom and me, but it’s because she loves to wheel around so much.”

The last few months have also had their share of difficulties for the Freres family. Reagan received a Type I Diabetes diagnosis, and they found out since we spoke last that Charlotte has autism.” Amid adjusting to this news, life continues, and Bryan says he tries not to allow it to stop him from enjoying the “Little Moments,” something he says he reminds himself often to do, giving a nod to the song by Brad Paisley. “I played it for Ciara recently when we needed a reminder after our basement flooded.”

“My husband, Bryan, is an inspiration to me. He makes sure nothing is out of reach for our daughters, and they are always included. Something I admire so much about Bryan is that he takes each opportunity to help Charlotte access things that may be challenging for her to do. For example, if Charlotte wants to go down a slide or jump on a trampoline, he helps her achieve those goals. Bryan is a hard-working, fun-loving, amazing father and our family loves him dearly!” said Bryan’s wife Ciara.

Bryan also said it is in fact those little moments that he loves the most about being a dad. “I love when I see the light bulb go off on Charlotte, or Reagan’s face. It is like magic to me. For Charlotte, it might be when she realizes she has learned to mimic a word. For Reagan, it is being present for all of her questions and curiosity. For example, she has been learning about the moon, and we were standing on the deck the other night, and she asked, ‘Daddy why is the moon the so bright?’ I love being present in those instances.”

We asked Bryan about the challenges that go hand in hand with being a dad, and keeping it lighthearted, he laughed and said that he thought he initially might be a boy dad. “I thought we’d throw the ball around in the backyard, and that sort of thing. Now I have two girls. Neither one of them are too into sports. Reagan is turning out to be quite a diva. She loves to play princess, and make crafts. Charlotte loves Elmo. She likes me to come sit with her and watch Elmo, and so, I get to be present with her in that way. I would not have it any other way. I love being a girl dad.”

Fortunate and blessed with a great father of his own as a role model, Bryan said that is where he learned to be a great dad. Bryan’s parents will be moving to the Champaign area this summer. They plan to retire here to help Bryan and Ciara care for Charlotte and Reagan.

Bryan hopes to one day gather all of the lessons he is learning from being a dad into a book. “We’re not some kind of model parents or anything like that. We are simply doing the best we can, and learning each day as we go. He would like to help others understand some of the misconceptions around parenting a child with disabilities. “People often perceive it to be a burden, and I want others to understand how much light Charlotte manifests everywhere she goes.”

For fun, Bryan enjoys taking his girls to Elevate Trampoline Park. They also go on adventures together.

Happy Father’s Day, Bryan! We appreciate all you do as a dad!